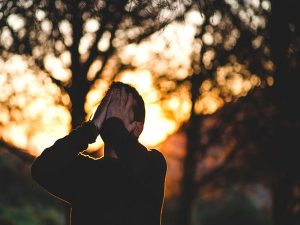 Our world has a fascination with fear. Horror movies are becoming increasingly popular, especially among younger populations. Many people (myself included) like to hide in the shadows at home and startle unsuspecting family members. Many governments around the world use fear to control their countries. On a more somber note, predators often use fear to keep their victims from trying to escape or contact a rescuer.

Today we have a virus whose power reaches beyond the immune system of hundreds of thousands of people; its power now reaches into the souls of billions who have yet to experience the illness.

But where did this power come from?

We gave Covid-19 the power that it wields.

If you think about it, fear has no power. Fear is a self-induced emotion that each individual crafts for himself, thus resulting in a variety of fears from person to person.

Some people are scared of spiders, but they aren’t born that way. They form a set of conclusions about spiders and then react based on those conclusions. Other people come to different conclusions and decide that spiders are not frightening. Some people eat spiders.

Ironically enough, although fear itself has no power, when we choose to fear something, we voluntarily give up some of our own power and transfer it to someone or something else.

This is what has happened in our world today with Covid-19. Fear of the unknown has caused us to voluntarily give up our power and transfer it to a virus that has only been alive for a few months.

But a desire to have that power back has resulted in panic- panic buying at Wal-Mart and panic selling on Wall Street.

Unfortunately, Covid-19 is more powerful than most people realized, and its power has only been strengthened by the power that everyone has voluntarily transferred to the virus. We have made the novel Coronavirus the force that it is today.

Does this mean that we were wrong to shut down businesses, cancel meetings, and refrain from traveling?

No. Those actions are called wisdom.

Stockpiling toilet paper and food and other essentials, fighting with others over who gets to buy something, and sitting at home worrying about where our next paycheck will come from? That’s fear.

“But if we don’t do these things, we might not survive!”

Doubtful. Our world has survived world wars and pandemics and malicious governments and natural catastrophes. We will survive Covid-19 too.

Nevertheless, for me to stop there would be callous. The issue is much bigger than that, and a response that shallow will not help or encourage anyone.

That being said, stay tuned for my next post…

(If you enjoyed this post, I would appreciate it if you shared it with others!)