“I firmly believe that God is larger than this dreaded virus. You can quote me on that.” Bishop Gerald O. Glenn shared these words in a sermon to his congregation at New Deliverance Evangelistic Church in Richmond, VA, on March 22.

This in-person sermon was also the last that Bishop Glenn would deliver.

One week after choosing to meet despite national warnings to “social distance” and avoid groups of more than 10 people, the church suspended its meetings and chose to adhere to the recommended guidelines.

A couple weeks later on the eve of Easter, Bishop Glenn died from complications with Covid-19.

To be clear, the church was not breaking the law. The 10-person limit did not become an executive order in Virginia until Monday, March 23. Furthermore, Bishop Glenn may not have contracted the virus from his church; he could have gotten it at the grocery store or the gas station or somewhere else.

But the sad story prompts questions among those in his congregation and the rest of us observing the world today. Even if we have no fear of death, is it right for us to gather anyway and ignore state and national recommendations? Does God give us the divine right to defy government bans and hold weekly meetings?

Is God “larger than this dreaded virus,” as Bishop Glenn said three weeks before the virus transferred him into the presence of God?

The national headlines are full of stories of pastors and churchgoers who have chosen to ignore government regulations and meet anyway in large groups. Unfortunately, during a time when many non-Christians are open to the Gospel, several churches are giving Christianity a bad reputation.

In a sense, these people are flaunting their fearlessness.

A Florida pastor was arrested on March 30 because he held normal church services two days after his county banned such gatherings in the interest of public safety: “Pastor Rodney Howard-Browne, who leads a megachurch in Tampa, Florida, was arrested Monday for refusing to cancel services in compliance with a local government directive telling people to stay at home except for essential needs. Citing religious freedom, The River at Tampa Bay Church held two services last Sunday, even busing people in to them.”

On Easter Sunday in Kentucky, a church gathered together in their building, and a few of the congregants have since sued their governor for violating their constitutional rights.

Pastor Tony Spell in Baton Rouge, Louisiana, has continued to hold services every Sunday because he says that the First Amendment cannot prohibit him from doing so.

Many other believers would also argue, “Jesus said that ‘He who hears you hears Me, he who rejects you rejects Me, and he who rejects Me rejects Him who sent Me'” (Luke 10:16). In other words, there will always be people who reject Christ and look with disdain upon believers.

But when fear of a virus closes down the world, does God want us to make a name (good or bad) for ourselves and for him at this time, or does he want us to abide by the same rules as everyone else?

It is true that born again believers will always be foreigners in this imperfect world. Our home is in Heaven and on the future New Earth. We should never feel comfortable here because God has far greater things planned for us.

Putting all the politics aside, however, God presents a balanced view of earthly stewardship, obedience to God, and submission to government authorities.

In Genesis 1:28, God commanded man to have dominion over the earth. Earth is one of God’s gifts to us, and he expects us to subdue it, care for it, and use it for his glory. Therefore, even though viruses were not part of the original creation, we should still do our part to exert control over viruses, limit their spread, and keep the earth healthy.

The Old Testament details the history of Israel and how God told them repeatedly that obeying him was more important than anything else; likewise, failure to obey him would bring judgment (and God kept that promise too). Therefore, our utmost goal in all things should be to obey God.

Facing persecution in Acts 5:29, Peter told the Jerusalem officials, “We ought to obey God rather than men.” Therefore, when the government prohibits us from obeying God, we should prioritize our allegiance to God.

Here is God’s version of the First Amendment, however: “Let every soul be subject to the governing authorities. For there is no authority except from God, and the authorities that exist are appointed by God. Therefore whoever resists the authority resists the ordinance of God, and those who resist will bring judgment on themselves. For rulers are not a terror to good works, but to evil. Do you want to be unafraid of the authority? Do what is good, and you will have praise from the same” (Romans 13:1-3).

Bam! There it is. Obey your governing authorities. God appointed them and gave them to us. End of discussion. 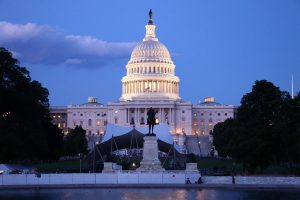 If we do good, we should receive praise from them. Now if they do evil and disobey God themselves, they are resisting their authority (God) and will bring judgment on themselves. In such cases we are exempt from their authority because they are no longer practicing their divine responsibilities.

As much as I love independence, as much as I think the whole Covid-19 scare is blown out of proportion, and as much as I love my church, I still believe that believers must submit to government regulations during this time. Not because we are fearful, and not because all the government officials are necessarily right, but because God told us to obey them.

Is the virus as serious as the government says it is? I personally do not think so, and you are free to disagree with me. There are doctors, nurses, scientists, and politicians who would say the same, but the media does not usually promote their views.

Yes, thousands of people are dying from the virus, but I have already written about the other dangers of this world that take thousands of lives every single week. In case you haven’t noticed (or read in your Bible), almost every person who has ever lived will die. Most of us will die from other viruses, cancers, accidents, etc. Only time will reveal whether or not we overreacted to Covid-19.

Nevertheless, I believe that most of our government officials honestly want to protect our health and safety. They have put these regulations in place to protect us, not to harm us.

Have they thought through all the implications of their actions, especially the stay-at-home orders? Perhaps not, but neither did they have much time to act. But for the most part, they have good intentions.

The WHO, the CDC, President Trump, the governors, and anyone else with authority wants to protect you and me from this novel coronavirus. Yes, sometimes they can be like overprotective parents, making wrong decisions that do not benefit us in the long run. This is why freedom of speech and open dialogue is healthy for our country (and for children and parents!).

Right now our elected officials are trying to keep us healthy; they are not targeting churches, promoting persecution, or attempting to stamp out the Gospel. Their desire is not to keep you or me from worshiping God and practicing freedom of religion.

Speaking of the First Amendment, it’s true that it explicitly says, “Congress shall make no law respecting an establishment of religion, or prohibiting the free exercise thereof.”

So we can still have church meetings despite the stay-at-home orders, right?

Well, those orders vary from state to state and are put in place by governors. To my knowledge, the federal government has issued recommendations but not nationwide orders. Therefore, Congress (the federal government) has not made any laws “prohibiting the free exercise” of anyone’s religion. Some governors have, but Congress has not.

So the way I understand the law, churches may freely meet in states that do not have the shelter orders because of their First Amendment rights. Perhaps you may even interpret the First Amendment to include governors in your definition of Congress.

But is it wise? Will it help the furtherance of the Gospel?

Furthermore, even if we have our First Amendment rights, why are we using a man-made law as our basis for meeting together and worshiping? Those who do so are contradicting themselves when they say that man is not our authority.

But we should also honour our government because God’s Word tells us to.

Observing the Covid-19 recommendations and state orders do not prevent us from doing everything God tells us to do. We can still make disciples, we can still meet together (even if it’s online), and we can still live our everyday lives in one way or another.

Therefore, even if our lives are not characterized by fear, we should still submit to our authorities and seek to do our best to comply with them because God said so.

In the end, if we do not flaunt our fearlessness by opposing our government, we “will have praise from the same” (Romans 13:3).

What do you think? Am I right? Am I wrong?

How do you interpret the First Amendment, Romans 13, and the orders and recommendations that we have received in recent days?

To learn more about the stories I mentioned in this post, you can read the articles below on ChurchLeaders.com. Most of them are written by one person, but she writes to share the facts without inserting her opinion.

Pastor Arrested for Holding Church in Defiance of Directive

Pastor Does Not Want A Govt Handout, Just Your Stimulus Money