After waking up really tired again, I think I decided not to run anymore until Monday. I know I’ll lose some of the strength I’ve been building up, but I’d rather have that energy from exercising to finish out this music week. As the photographer, I also do a lot of walking around in the heat, and I don’t want to drain myself.

So I waited for Stephen to wake up and then I went with him up to breakfast. Today it was French rolls with scrambled eggs and ham, papaya, hot milk, and avocado shakes. I really like the shakes because we had them in the Philippines too. They are sweetened, so they don’t taste like the avocado we use for guacamole at home. They just taste like thick, fruit-flavored shakes!

My devotions were in the second half of Acts 14. It’s amazing how much influence the Pharisees. The people in Lystra were worshiping Paul and Barnabas in one verse, and in the very next verse they were persuaded by the Jews that these men ought to die!

What I really like about this passage though is that it did not deter Paul and Barnabas from accomplishing their mission. Being persecuted actually kept the people from further worshiping them, and after leaving Lystra, Paul and Barnabas came back through the city on their return trip! That’s courage and confidence in God! Amazing. 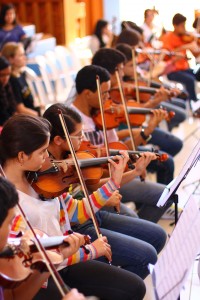 Instead of going to orchestra rehearsal right at 10:00, I went around to the other rehearsals to take some pictures first. I went to the capela (chapel) to take pictures of the other orchestra, and I found both choirs practicing their music. After taking my pictures I went up to the dining hall to join my orchestra.

Lunch was rice, beans, vegetables, and some kind of meat…I can’t even remember what it was (because I’m actually writing this blog post a day late). Supper was the same thing with the addition of some kind of pasta. It’s been the same meal twice a day all week, but it tastes good, so I like it.

Danae and I sat with a couple girls who wanted teach us Portuguese and work on their English, so we ate with them and taught each other a few new words. One of the girls spoke good English and had a decent vocabulary and the other one also spoke a little English fairly well, so Danae and I had fun talking with them. 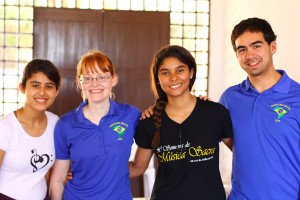 It was also during the meal that I noticed a few little girls at a nearby table who tried to hide every time I looked at them with my camera. Later I was walking back to the administration building when they saw me and ran away. So I got out my long zoom lens and put it on my camera- it was time to have fun. 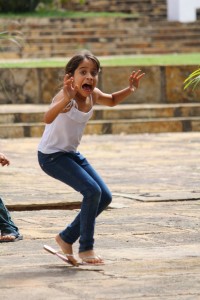 I LOVE action shots, and some of the best pictures are those of little kids running. So I always savor the opportunity to play along with kids that are running away from me. I don’t start the chase, but if they start running, I commence a chase. It’s photo tag!

So for several minutes I stayed in the building moving around to strategic doorways and windows as they ran around the building and tried to figure out where I was. Fortunately, I considered myself the winner after getting the good pictures I wanted.

The afternoon was more of the same- pictures and orchestra rehearsal. This afternoon the choirs joined the orchestras, so we were able to practice Elias with the orchestra and choir combined for the first time. It helped us all to finally hear how the parts all fit together.

I also discovered that Danae also has a blog in which she is documenting her own trip here in Brazil. So I read all her blog posts up to date about Brazil. It was neat to read about the things we experienced together and to hear many of the same perspectives about those things. You can also read her blog at http://ruminationsfromaredhead.blogspot.com.br/

After supper in the evening, all the people who volunteered as teachers for the week put on a concert of classical music. It included a flute solo, a piano/violin sonata featuring Stephen, and several vocal solos, most of which were sung by Joy Baxter and Olivia. I walked around and took pictures the whole time.

I met with Pastor Daniel to upload the day’s pictures and then came back to the house. However, the gates around the campus were already locked, so in order to get out I had to climb over the wall, get a key from Jennifer Leonard, and go back and unlock the gate and retrieve my stuff.

It wasn’t long before Stephen and Olivia returned from an evening out in Crato, and we got ready for bed. At midnight I wished Jennifer a happy birthday and a little while later I was in my bed, getting some much-needed rest.