When my alarm went off this morning, the last thing I wanted to do was get out of bed. I wasn’t necessarily tired although I definitely could have slept longer. Rather, I just didn’t want to get out of my really comfortable bed and go running. But I took a break two days ago, so after laying there for almost an hour, I finally got up and ran.

It was wet outside, so it was obvious that it had rained overnight. I got up to the seminary road and had run only a half lap around the campus when it began to rain again! So I just kept running…in the rain…in the desert. I don’t do that often, but today I had the chance. It didn’t stop raining either as I ran my five kilometers. 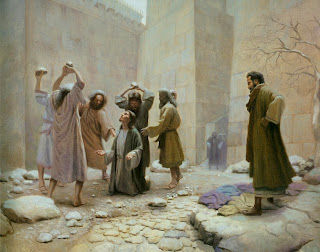 When I got back I read Acts 7. Man, Stephen knew Israel’s history so well! He knew it so well that he could quote what God said to Israel when he gave commands to them. Imagine the sorrow and consequences that Israel could have avoided in their early days in Canaan if they had the same grasp on their history that Stephen had!

Furthermore, I was struck by the fact that the first martyr was not an apostle, pastor, or missionary. He was a layman in the church, faithfully fulfilling his responsibilities and sharing the gospel!

I had never considered it before, but Stephen is a prime example of how the men in our church today should function. You don’t have to be “called” to full-time ministry to do great things in ministry. You don’t have to be a pastor or vocational missionary to study and know Scripture well. Just look at Stephen. Because of his passion for the gospel as a layman in the church, he was put to death. Wow.

For breakfast we had cinnamon rolls, baked oatmeal, papaya, and orange juice. Rest of the morning I spent writing my blog and studying for the message I preached this evening. Halfway through the morning, it started raining again! It poured monkeys and donkeys for several minutes, something that never happens here at this time of the year. For a moment I thought I was back home in Iowa…

Soon enough it was time for lunch, and we ate chicken lasagna and fettuccine alfredo with cooked broccoli and cauliflower for the vegetables. We didn’t know when supper would be, whether it would be in a couple hours or not until after the evening service.

We left at 1:30 to go to their church’s Sunday School for the children at the school. Due to a huge Brazilian holiday known as