“It’s new technology. There are only three of them in the world, and we have two of them,” the security guard said to me when I asked about the sci-fi-looking security scanners. Almost every time you enter a building in Washington D.C., you’re required to go through a security check, but none of them is as fancy as the ones you encounter when you walk through the doors of the Museum of the Bible.

(Check out this picture from Mom with a Map. I was too scared to take my own picture.)

Thus begins an amazing, state-of-the-art encounter with the world’s most famous book. I have also visited the Creation Museum and the Ark Encounter with their top-notch displays (and I highly recommend both), but the Museum of the Bible tops them both (at least for now; the Museum is undergoing some improvements, and they keep adding on at the Ark). 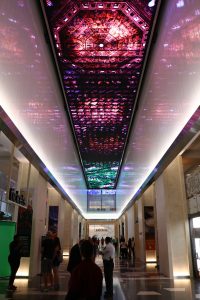 After getting past security, you are greeted by the Grand Hall with a ceiling that contains a gorgeous 140-foot digital display that constantly changes colours as it showcases various images and scenes from nature…and that’s only the beginning.

The second level, where the main exhibits begin, showcases the Bible’s impact on the world. One of my favourite theatres inside the building is also found here.

The Washington Revelations theatre is a virtual reality ride that flies you around the Washington D.C. and shows you where Scripture is built-in to some of the capital’s significant landmarks. Everyone stands on a moveable platform that tilts forward and side-to-side, and you feel the wind blowing past you as you zoom along- you literally feel like you’re flying!

Did you know that many of the inscriptions on buildings in D.C. include direct quotations from Scripture? Did you know that at the tip of the Washington Monument, “Glory to God” is written in Latin? This is a ride you don’t want to miss if you visit!

(In full disclosure, I went through the Washington Revelations twice…it was that much fun!)

The Bible now room is an interesting room full of interactive touchscreen displays and walls that are literally covered with constantly changing images. The room displays in real time how the Bible is being referenced in social media and the news around the world. 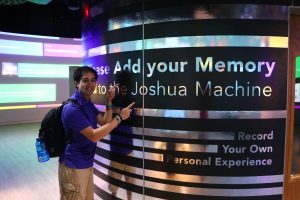 You can discover which Bible verses are shared the most all in various countries around the world, and you can design a digital image with a Bible verse you like and see it displayed on the wall. Then for a brief moment, the room is transformed into the Holy Land as video from Jerusalem is streamed live into the room.

In the “Joshua Machine” you can share a testimony of how the Bible has changed your life. This room is especially fun for kids because there are so many personalized things to do.

Rest of the second floor walks you through a series of displays that show the impact of the Bible in America and the world. The exhibits are fact-driven and thorough. 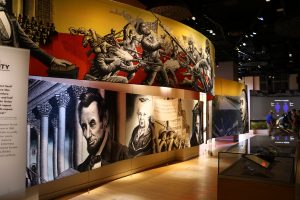 Rather than taking a particular position on Scripture, they show you how Scripture has impacted people and decisions down through the ages from Christopher Columbus to Elvis Presley, from the War Between the States to pop culture, and from the Geneva Bible translation to the Lunar Bible printed on microfiche.

Some of the highlights for me on this floor included a 1614 copy of the original KJV, a large Bible that was given to Abraham Lincoln by emancipated slaves, and a functioning facsimile of the Gutenberg Press where museum guests can print their own copies of a portion of 1 Samuel in Latin.

So, that was all great and such, but the third level reset the awe-factor in my mind all over again. Unlike the second floor, the third floor is more Gospel-oriented. The Hebrew Bible Experience takes you through the Old Testament from Creation to Israel’s release from captivity.

If you have the privilege of visiting, I do not want to spoil the surprise for you, but let me just say that you will never know what’s coming next as the biblical narrative unfolds. It is comparable to the Creation Museum’s walk through history…but on a completely different level.

Haha, now you have to go discover it for yourself  😉 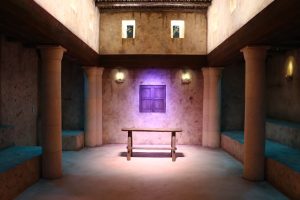 The “World of Jesus of Nazareth” exhibit is a reconstruction of what Jesus’ boyhood home would have been like, complete with a carpenter’s house, an olive press, and a synagogue.

In the New Testament Theater, you learn about several individuals from the New Testament and the role they had in composing the NT books. Unfortunately, the events of the book of Revelation are left out as it ends with the apostle John writing from the island of Patmos.

I forgot to mention earlier, that the museum takes at least two days to get through if you want to enjoy all it has to offer. I went with three other people, and we did not have enough time to get through the fourth level which talks about the history of the Bible itself. 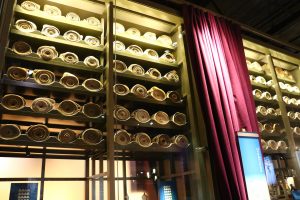 Here’s how the museum describes the  floor in its museum guide: “Featuring more than 600 artifacts and 50 media programs, Floor 4 immerses guests in the Bible’s journey through technology and culture.”

Like I said, I did not have time to take it all in, but everywhere I looked there were old manuscripts, giant scrolls, and interactive panels. It was quite impressive, and I might have to start there when I return someday.

One room in particular was quite sobering. The “Illuminations” room is like a library, the walls lined with lots and lots of books. Each book represents a language of the world, and the colours of the book indicate whether those languages have the whole Bible translated, a portion of the Bible translated, or none at all. 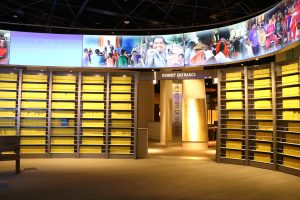 The yellow books were the languages that do not yet have a single verse of the Bible translated, and the room was filled with these yellow books. Man, we have a great task still ahead of us.

The fifth level has additional exhibits that are still under construction and the “World Stage Theater” where you can hear dramatic readings of Scripture at specified times.

The sixth level has a restaurant and meeting rooms that can be reserved for special events. You can also get some skyline views of Washington D.C. up there, but as a photographer, the sights were not that fantastic in my opinion. There are still too many buildings between us and the other landmarks in the city.

Here are just a few tips for visiting. First, arrive as early as possible, not only to see as much as you can but also to get in before the crowds.

Second, unless you want to pay a lot of money for their food, bring your own. The price of admission is low, but the food there is quite expensive.

Third, I think you will find it a family-friendly place, so feel free to bring children. They may not find it as exciting as other museums, but there is still a lot to do and interact with.

Fourth, if you know me personally, contact me to find out the least expensive way to get admission. I would be glad to help you out 🙂

Finally, read these other two reviews to learn about other things that I did not cover in this post.

Tips For Families Visiting Museum of The Bible

I hope you can visit!