Stephen and I slept in until almost 7:00 before getting up and going to breakfast. Breakfast is at 6:30 and the first classes begin at 7:30, but we knew that we had plenty of time to go eat before Stephen taught his violin students.

When we got there most of the food was gone, but we still got to eat French rolls with butter and cheese, papaya, and hot milk. It was plenty of food for us. Stephen went to his class and I went to the library to do my devotions.

This morning we started the first rehearsals at 9:00 instead of 10:00 so that we could have more time to practice altogether in the chapel as we prepared for the evening concert. I showed up around 9:30, took a few pictures of the orchestra and choir, then I unpacked my violin and settled in with the rest of them.

We practiced Elias until shortly after 11:00 and then we went back up to the dining hall to practice some more while the other orchestra and choir rehearsed in the capela.

At lunch we had our rice, beans, vegetables, and meat. As we  were eating, Pastor Renato announced that our afternoon rehearsal would begin at 1:30 and go as long as necessary, cancelling the last day of theory classes. Oh buddy…we weren’t quite prepared for that announcement, but we knew we needed the practice! 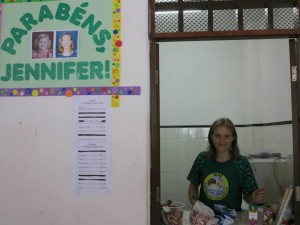 When Jennifer walked into the dining hall we all sang happy birthday to her in Portuguese, and later when there were more people we sang to her again, this time in English! Her parents also had a big birthday card for her hanging on the wall next to the cantina where she works every meal. Stephen told her he liked the baby picture of her, and I took that to mean that he didn’t like the picture of how she looks now, hahaha.

In the time we had before the rehearsal, I went with Sarah and Danae back to the Leonard’s house where I got a couple bananas for dessert. Many, I’ve always liked bananas, but I think now I’m addicted to them because they taste so good here and I always want to eat them! 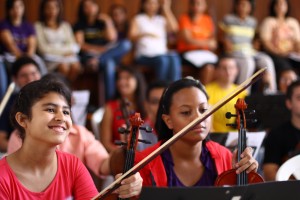 So…with a rehearsal that long, we were going to need all the energy we didn’t have! Well, I again took more pictures before joining the rehearsal myself, but I made sure I was there for the harder pieces. It was a good practice and we showed lots of improvement, but we still had our many rough spots.

We started shortly after 1:30 (eita! [oh, that’s an expression similar to “wow”, or so I’m told]) and finished sometime after 3:00 I think. The Elias group didn’t have any more rehearsal time, so as the other groups practiced, I spent some time working on my blog.

We ate supper at 6:00pm and then Stephen, Olivia, Sarah, Danae, Jennifer and I returned to the houses to shower and get dressed in our concert black and white. Our concert was at 8:00pm, so we had more than enough preparation time.

Some other concert was going on at 6:00, so they scheduled our concert to begin a couple hours later. I’m not sure if it was because people coming to our concert were also going to the other one? It didn’t really affect us either way because no one here could leave campus until the end of the day. It’s pretty much a music camp, and people don’t have the freedom to just come and go.

So we hung around the house, slowly getting ready, and at about 7:30 we all walked to the capela. The place filled up fast, and the concert was packed. It was so full that some people stood outside and just watched and listened through the windows.

All the windows and some of the doors here on campus are all just like large grates, always open without glass coverings. They don’t have air-conditioning and heat here because the temperature is about the same all year. It’s just warm, and the open windows allow air to pass freely through the buildings, cooling them. 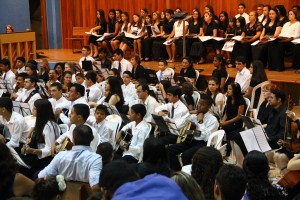 So the people who stood at the windows weren’t missing out on anything except for the fact that they were closer to the mosquitoes. But otherwise, they were really just standing at open windows, able to take it all in.

The concert was such a blessing. The first hour or so was a large selection of Brazilian hymns (some of which were written by members of the local Baptist churches), and they were played and sung by the orchestra, the choir, and some small vocal ensembles (like our string quartet piece that Pastor Renato arranged).

I played in the quartet and took pictures during the whole first half. I really wish I had video-recorded the last song that the orchestra and choir performed. It was a song that talked about Creation praising God (I figured it out on my own by reading the Portuguese words on PowerPoint!), and it was really powerful.

Out of 10 spotlights that were being used to light the front of the capela for the concert, only one was left on, leaving most of the musicians with only a dim light by which to read their music. It started with the violins, viola, and cello playing a soft, eery drawl that seemed to go nowhere.

The PowerPoint screen showed a picture of a beautiful waterfall and then pictures of colorful birds started to flash on the screen. Sounds of birds started to fill the room as various members in the choirs pulled out all sorts of bird calls.

Recorders and flutes joined the strings, and eventually the air was filled with not only bird calls but also several other wild animals sounds and we felt like we were in a jungle. The sounds quietly died out and then the choir made a soft entrance, growing in volume with each measure.

The nine other spotlights also started to turn on one at a time at the beginning of each measure until the room was once again lit, as if the sun was rising. The words showed up on the screen along with the choir, and it continued to escalate to a powerful conclusion.

I couldn’t understand all the words, but from what I did understand, I was so powerfully reminded of how great God is and how He is the Creator of the universe. Oh man, I SO wish I had recorded it!

When the song was finished, they took some time to give gifts to those who had helped during the week, especially the teachers. However, at the end of the list of people, I was surprised when I was called to the platform to receive a gift for my work as the photographer. It was such a kind act of gratitude on their part!

My name was announced as “Joshua Jordan Gonnerman Huang”, and I think many of the people applauded only because they thought my long name was really neat. Anyway, it was encouraging to know that they really appreciated my pictures and that it was truly a ministry to them. I hope the pictures serve as a good source of memories for all of them for a long time to come. I later opened my gift, and it is a mug with the Semana de Musica Sacra logo.

At this point we had an intermission to switch out the orchestras and choirs. I gave my camera to Jennifer to take pictures and then I sat down and helped my  string partners tune their violins. It was the moment we had been waiting for all week!

Before we played, a children’s choir sang four songs that they had been practicing all week. Pastor Renato randomly pulled out a string quartet arrangement for the second song, and he gave it to the orchestra to sightread. So we quickly ran through it one time with him and a few moments later, we were playing it with the kids! Hahaha…it was easy though so you wouldn’t know that we had just received the music.

The kids were SO cute, and whoever had taught them the music did a very good job. They enunciated so clearly and cut off so cleanly and sang so loudly. As they sang, many people in the audience sat there and mouthed the words along with them, and it was a sight that was equally as special as the kids themselves.

So…on to Elias. Hahaha…it was SO fun. As I told Stephen later, it was more fun than it should have been, because our two faster pieces with lots of notes were much faster than we practiced them in rehearsal, and we could barely keep up!

Some of us didn’t and got lost. Stephen said that the choir really pushed Pastor Renato along, and by that time there was nothing he could do to slow down the train. But it sure got our adrenaline pumping because we didn’t have much energy left after this week!

I also didn’t have the greatest concert overall, messing up on a few places with rhythms, but for the most part I did okay. Most importantly, it was ministry and we did it for God. So from that aspect, it went well, and it was exciting to be part of it.

The concert ended around 10:30, and for about half an hour I had picture after picture taken of me outside on the lawn. So many of the people wanted to have their picture taken with me, and we knew just enough of each others’ languages for them to tell me they wanted pictures and for me to agree to letting them take them.

As one of the guys told me, I was famous, and I sure felt like it too. Picture after picture after picture. But it was fun! Spending time with my partners in ministry just being silly after such a long week and making memories with new friends…it was all great. I definitely am not lacking in the picture department myself!

Finally we stopped and I gave all my new pictures and videos to Pastor Daniel before heading back and going to bed. To give you an idea of just how many pictures we took, I think I shall include several of them here. 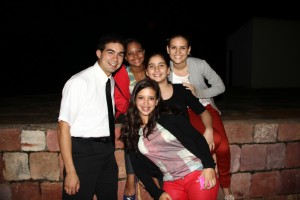 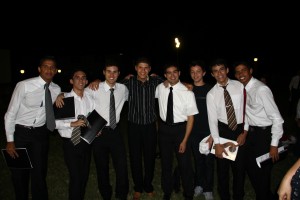 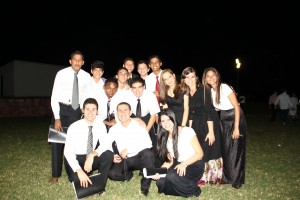 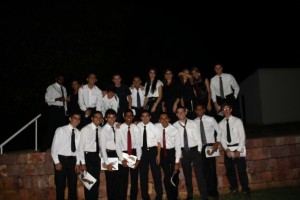 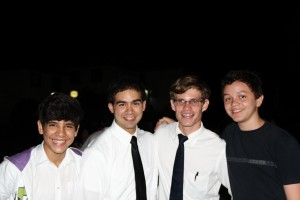 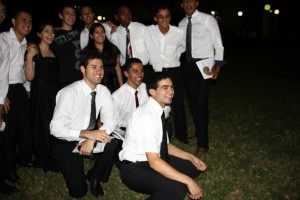 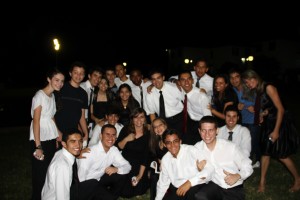 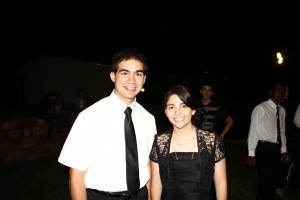 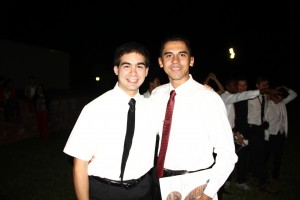 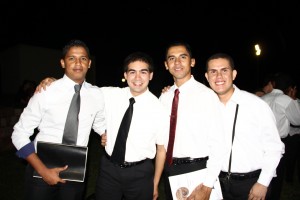 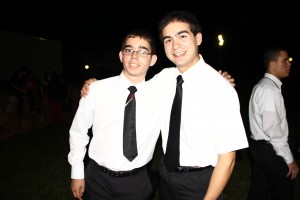