Woke up again around 5:30am to see if the sunrise would be worth watching, and it was. This morning the sky was full of clouds, so the sunrise was a pretty one. It wasn’t even close to being one of the best I’ve seen, but it was beautiful nonetheless.

As I watched it rise I ran some sprints on the property behind the house. My plan was to go up to the campus again and run around it, but the key to get out of our gated yard was gone, so I couldn’t get out without climbing the wall. I tried to run the equivalent of five 240-yard sprints, similar to what we do during the soccer season.

After taking a shower I went up to the seminary for breakfast. By this time the gate had been opened for the bricklayers, so I was able to get through without the key. I had a ham and cheese sandwich on French bread, papaya, two bananas, and a few mugs of hot milk for breakfast, and then I went to the library to do my devos.

Today I read the last half of Acts 13. Paul and Barnabas were in Antioch of Pisidia and Paul had preached to the Jews, warning them against rejecting Christ. The Gentiles had heard these words and begged Paul to preach to them the following Sabbath. Paul did so, and it angered the Jews. Unfortunately, they had done exactly what Paul cautioned them against.

The Jews were rejecting Jesus Christ and becoming envious of the Gentiles. Oh how sad it is when God’s people reject Him and get angry when other people hear His truth! That is what happened to the Hebrew people. I hope that my utmost desire for the gospel is to see it given to others and not just me. 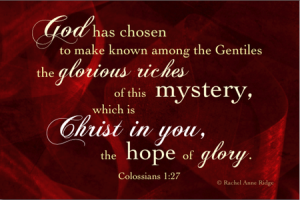 I also worked on Colossians 1 some more, trying to finish memorizing it. It is so neat how Colossians 1:27 fits in with what I read in my devotions today, how God desired to make the gospel known to the Gentiles. As a Gentile, what a blessing it is to know the mystery of the gospel!

Then I walked around for about an hour and took pictures of individual instrument classes. There was a beginner guitar class upstairs in the administration building, a more advanced guitar class in the library, and a beginner recorder class outside. 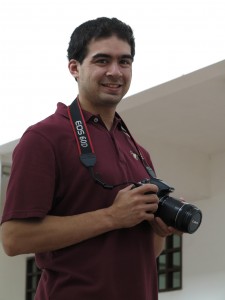 In the classroom building there were classes for beginner violinists, beginner and advanced flautists, pianists, vocalists, and advanced recorderists (what do you call them?). Up in the dining hall Stephen was working with the advanced violinists.

Walking around campus was like watching a video of different instrumentalists, with many different sounds fading in and out as I moved from one location to another. It was literally music to my ears!

However, I must admit that the noise coming from the beginners’ violin class was not pretty. Some of the harshest sounds come from a violin when a person is just learning to play it, and I can say that because that was me at one time. Danae later told me that she thinks a really bad sound also comes from the horn of a beginning trumpet player, so I guess it’s not just my fellow string players.

At 10:00 I joined Stephen and his orchestra in the dining hall for our morning rehearsal. I switched to second violin to help out the group with the sight-reading because they were having a few troubles. It was a good morning, but it took a lot of work for the group to start figuring out the music. I’ll explain in a later post what I started to realize during this rehearsal.

We kept playing until lunch and as people started arriving. Soon there were long lines waiting for the food to be placed on the counter, and we’re still playing away. We finally stopped and of course, everyone clapped for us. Way to set the mood for the meal, huh?

For lunch I had rice, beans, sausage stuffed pork, and fried manioc root. The manioc root tasted SO buttery, but it was really good! Danae and I really wanted bananas for dessert, so we walked down to the Leonard’s house to get some, and I stopped for a few minutes to talk to them about how the day was going.

After lunch we had the theory classes again, so I walked around the classroom building to take pictures of them in class. We had another shorter orchestra rehearsal that I went to, and then I worked on some more Portuguese vocabulary.

When I was done, I talked to John Peterson, an older missionary who I met last week at the Monday night prayer meeting. He asked if I sing or play an instrument, so I told him that I am a violinist.

He told me I needed to learn a new instrument, and he took me to his office and gave me a nose flute! I got a quick lesson on how to play it, and a couple hours later I was playing songs on it, just like he said I’d be able to. It’s really fun and easy!

We also talked about school (Faith Baptist Bible College) and church planting. He told me how Brazil used to be closed to church planting, and he used the nearby city of Barbalhos as an example of people that would not even rent a house or sell food to an evangelical missionary. It was interesting to hear more about the history of missions here in Brazil.

Next up was supper, and it consisted of rice, beens, pasta, grated cheese, lettuce, cucumbers, and fried chicken. Since my pop fast is over, I also accepted a Sprite from Junior, the seminary student who translated for me two weeks ago in seminary chapel.

Junior and I were the last ones to leave supper. He told me about his desire to go to Portugal to do church planting. He wants to plant a church and then train Portuguese nationals to go and plant churches throughout Europe, similar to what the American missionaries are doing here at this seminary with the Brazilians.

After supper I worked on some more Portuguese and then went to the chapel where everyone was watching more videos of orchestra music. When I arrived, they were playing Sibelius’ Finlandia, one of my favorite songs.

I got to play it for two years in college, and hearing it brought back all sorts of really good memories for me. I smiled the whole time and imagined that I was playing along with them.

Finished out this evening with our last orchestra rehearsal of the day. We did some more sight-reading of songs that we had not touched yet, and we worked on picking up the tempo on some of the other songs. Afterward I helped Pastor Daniel upload some more pictures to Facebook, and that’s it!

After playing my violin three times and learning to play a nose flute, I’m gonna get a good night of sleep tonight!