Got up around 5:45 and went for a 6K run, read the first half of Acts 13 where Paul preaches to the Pharisees after being commissioned as a missionary, took a shower, and went to breakfast with Stevie. For breakfast we had scrambled eggs, French rolls with butter, and papaya. I avoided the gross coffee once again and drank several mugs of hot milk.

One of the music teachers for the week at breakfast with us. His name is Renato (not the director for the week), and he arrived by plane last night. Unfortunately, his big suitcase did not arrive with him, and he’s still trying to find it.

He’s so hilarious! As he recounted the story of his experience at the airport- checking in his luggage and later being unable to retrieve it- he told the story in such a way that we couldn’t stop laughing!

Renato told us that the lady who checked his bags told him he could only take one carry-on, but he was bringing his two expensive flutes, so he insisted that he get to carry them on to the plane. The lady finally told him that they would make a special exception for him, but when he boarded the plane, several other  people also had two carry-on bags.

He wonders if she forgot to actually check in his large suitcase because of her preoccupation with his two small bags. He said, “She was so concerned about the flies that she missed the camel!” I wish I could remember everything else he said that made us laugh. 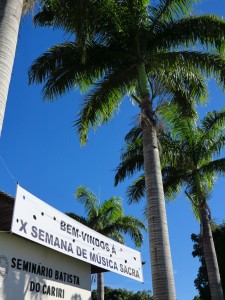 Today is the first day of Semana de Musica Sacra (Week of Sacred Music) at Seminario Batista do Cariri. A good portion of my morning and afternoon was spent taking pictures of the various activities taking place. For me it was just like “the good ol’ days” at IRBC when I would spend my days taking pictures of campers and camp activities.

I spent the last four summers as the photographer at IRBC, so I spent 44 weeks over the last four years walking around the campground, photographing almost everything that happened. My job title was “LCA”, an acronym for “Lights, Camera, Action!” This is my first summer since 2009 not serving at IRBC as the LCA.

When I first made the decision to follow God’s leading to Brazil, I had no idea that I would get to spend a whole week down here photographing an event. But as it turns out, a friend of mine from school referred me to the director of Semana de Musica Sacra, and he asked me to take pictures all week. 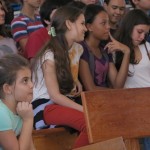 So I am now the “fotógrafo oficial” for this fun ministry. I get the privilege of taking all the pictures and video and uploading them to the internet each night.  This morning I started by taking pictures during registration and the opening meeting.

We went straight from the opening meeting to lunch where I had mashed potatoes, beans, and fried fish in some interesting kind of sauce. There was also something else with the appearance and consistency of mashed potatoes, and it tasted familiar, but I don’t know what it was.

Near the end of the meal Renato came and sat with us again, and we started laughing all over again. Somehow we got on the topic of Minnesota having 10,000 lakes, Finland having over 200,000 lakes, and Holland being below sea level. Renato said, “Why do they live there, knowing that the sea could close in on them at any time?”

Then he talked about the people who live in San Francisco: “They know there are going to be earthquakes, but they just don’t know when. Why do they live there?” But he talked about it in such a way that we were shaking in our seats with laughter.

“Japan sits on the corners of four tectonic plates, and there are Japanese people living there…Somebody needs to tell them!” Hahaha…then I mentioned to Stephen how his family was going to Japan in just a few days, and Danae mentioned that a couple of our friends just arrived there.

Then Renato talked about Indonesia. Someone mentioned earthquakes again and he said, “No, tsunamis are the new fashion,” and we laughed all over again. But he said everything so serious! I wish I could eat every meal with him! 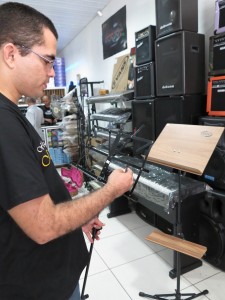 After lunch I went to Juazeiro with Pastor Renato (the other Renato) to buy some music stands. My home church gave me a lot of extra money above my support to use for any other ministry needs here in Brazil. The seminary is always in need of extra stands for this event, so we went to a music store and bought 20 music stands for R$ 800 ($357.70 USD).

It was so exciting to make that purchase for the seminary on behalf of my church. God provides in unique ways, and Pastor Renato was so grateful to have the new stands. They have already been put to use today.

By the way, if you ever travel overseas, I highly recommend getting a travel cash card. It’s like a debit card that you can use overseas. It won’t inadvertently lock up your bank account, and it’s not even connected to it, so if the card is stolen, people can’t drain your savings.

It works just like a credit card or a debit card with a PIN number. I used it today for the first time, and it didn’t have any extra charges or give me a low exchange rate. I was able to make the purchase in Brazil’s currency with today’s exchange rate and no additional withdrawal fees. Nice!

Rest of the afternoon I spent taking pictures of music theory classes and just walking around. In the library a met a guy named Lucas, a Brazilian guy who went to London for a few months to study English. However, he doesn’t get to use English here so he enjoyed talking to me in his second language.

My next stop was the chapel for a theology of worship session, held every afternoon at 4:30. It was quite philosophical, making it difficult for even Sarah to fully understand what he was saying, let alone translate it to Danae and me. But I think we figured out some of it.

Supper was about 20 minutes late at 5:50. We had rice, beans, shredded lettuce/carrots/cabbage, and chicken. I sat at a table with some people who didn’t know me and they thought I was Brazilian! Hahaha, they were quite surprised to find out I wasn’t.

There was another session after supper that was more of a music appreciation session, and we watched a video of an orchestra. At 8:00 we all split up into our separate sections to practice the music for our weekend concerts. 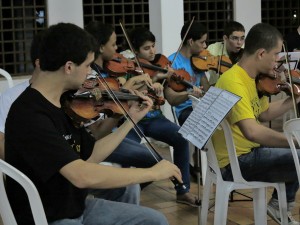 There are two orchestras and two choirs. The more advanced orchestra and choir are doing selected portions of Mendelssohn’s Elijah, and Stephen asked me to join the orchestra for that piece. It was a fun hour-and-a-half, sight-reading some new music. Stephen is leading the orchestra, but of course he does it all in Portuguese, so I also had fun learning some new Portuguese words for the musical terms that I already know.

I just met with Pastor Daniel Simoes to give him all my pictures and videos, and he’s busy uploading them on Facebook and Youtube for the seminary. Time to head back and get ready for another full day of pictures and music! 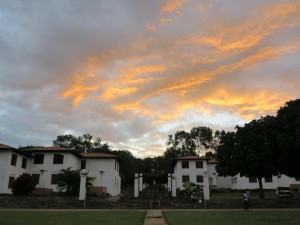