I woke up to run…and I didn’t run. My legs were so sore that I decided I should take the day off after breaking them back in the last couple days. So back to bed I went, and it felt good to sleep in for the first time all week.

Acts 5:33-42 was the passage for the day. For anyone who didn’t pick up on it, I’m reading through Acts right now. It seemed like an appropriate passage of Scripture for Brazil, and just the right length too. If I read half a chapter each day, I could start shortly before I left for my 50-day trip and finish shortly after I return. 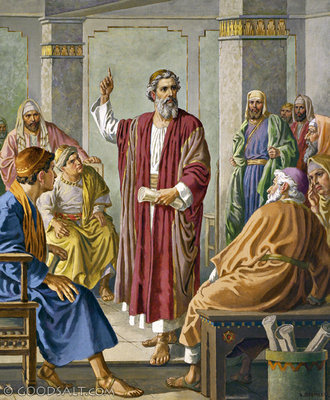 Peter and the apostles had been imprisoned, freed, and were now on trial again. In this passage, the Pharisee Gamaliel stood and spoke wise words to the angry council: “Men of Israel, take heed to yourselves what you intend to do regarding these men…And now I say to you, keep away from these men and let them alone; for if this plan or this work is of men, it will come to nothing; but if it is of God, you cannot overthrow it – lest you even be found to fight against God” (Acts 5:35,38-39 NKJV, emphasis mine).

What a great encouragement for the day! Whatever goes on in life, if it is of men, it will surely come to nothing. Brazilian futebol, NBA basketball, health care reform, prosperity gospel…it will all come to naught! But if anything is of God, no one can overthrow it. Opposition to God is a bad position with God.

But then in verse 41, it says of the apostles, “So they departed from the presence of the council, rejoicing that they were counted worthy to suffer shame for His name” (NKJV). Whoa…rejoicing because you got to suffer shame for One’s name? Why? Because ultimately it is only the opposition of God who will be ashamed.

So that’s how the morning started. Breakfast was cinnamon rolls, bananas, and papaya. Man, I didn’t really like the papaya two days earlier, but now I’m beginning to like it a lot and look forward to eating it the next time.

After breakfast we went downtown to finish the errands we could not complete the day before. We paid the bills, transferred a land title to a church, bought some eggs and went to a small children’s school to fix some lights. I learned some interesting things related to each of these four tasks.

First of all, when you pay your bills, you go to a place that is specifically designated for payments. This place also sells lottery tickets, and the lottery is owned by the national government. So Brazil has a federal lottery. You can go to buy tickets and pay your bills at the same time…makes sense, eh?

We stood in line for about half an hour to get to the counter to pay the bills. This is typical, and it may be longer. However, a few people cut right to the front of the line and no one bothered to stop them. Here in Brazil, if you are old, pregnant, or toting young children, you are allowed to cut to the front instead of waiting in line. Makes sense, but SO unlike America.

As for the land title. Pastor Jim had worked to plant a church in a few Brazilian neighborhoods, but he intentionally didn’t focus on getting property for a building. Instead, groups of people met in houses and once a week they would get together at a specified location, but it was always a different one.

However, the nationals said that because they didn’t have a permanent location, some people would not join the church. Without the building, people didn’t view the church as having any validity. So now they are getting land and building on it.

Okay, the store where we bought the eggs was literally just an egg store with stacks and stacks and stacks and stacks of eggs. Just look at the picture. I’m sure many countries around the world do this, but I’ve never seen it in America! So I thought to myself, do they really sell out on these eggs in one day? But no, if they don’t sell, they sit there…and when people bring eggs home, they set them out until they’re ready to use them.